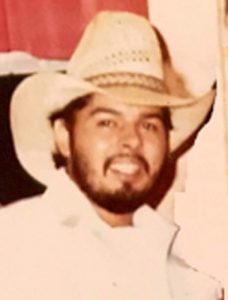 He is preceded in death by his grandparents, Alberto and Antonia Flores.

Visitation was held on Wednesday, October 9, at Peters Funeral Home from 4 to 9 p.m. with a Rosary at 7 p.m. Funeral Services were held at the Sacred Heart Catholic Church on Thursday, October 10, at 10 a.m. Interment followed at the Cotulla Southwest Cemetery.

Funeral arrangements were under the direction of Peters Funeral Home of Cotulla.