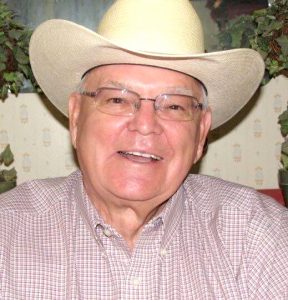 He was preceded in death by parents Delbert Moore and Montie Moore, and brothers Terry and Bill Moore.

He is survived by his wife of 60 years, LaRue Moore of Odessa; his daughter Emily McDoniel and her husband Randy of Midland; grandchildren Sam Hurt of Lubbock, Hallie Hurt and her wife Jordan also of Midland, Jessica McDoniel of Ft. Worth, Jay McDoniel and wife Noah of Seattle, Washington, and Jeffrey McDoniel of College Station; great-granddaughter Celia Hurt, Kyler Hurt, Finn Hurt and Kiera McDoniel; sisters Luel Crawford and husband Sandy, and Deborah Knudtson all of Durant, Oklahoma;brother, Paul Moore and his wife Judy of Plano; along with numerous nieces, nephews, and cousins.

Upon graduation from Pearsall High School he joined the US Air Force where he was assigned to the Strategic Air Command working with the computer systems on the B-47s. After serving 4 years he was awarded an honorable discharge, he then attended Texas Tech University where he earned a teaching degree in mathematics. During his third year of college he met  LaRue Ford, on a blind date at his uncle’s church in Kermit, Texas.They were married June 6, 1959. After graduation from Tech, they moved to Odessa where he signed with ECISD to teach various math classes at Ector High School. He was promoted to assistant principal of Blackshear Junior High for several years and then returned to Ector in administration, and was the last principal of Ector High School. He served as Director of Curriculum for the district and retired after 31 years of service to public education. Upon retirement he became involved in researching his family ancestry, Rotary International, Sons of the American Revolution, Ector County Historical Commission, being a docent at the CAF, volunteering for 13 years at St. John’s Episcopal School, and kept up with various graduating classes of EHS. He loved history, western art, collecting 19th century American coins, traveling, reading, fishing, the music of Bob Wills, collecting cowboy hats, playing guitar, country western dancing, chasing grandkids, and spending as much time as possible with family.

A memorial service will be held Saturday, November 16, at 11 a.m. at New Life Church, 7184 Club Dr., in Odessa, TX. The family asks that in lieu of flowers, memorials be made to Madison Medical Resort.