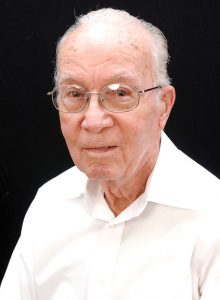 Elmer Woods Lindsey, died on November 8, 2019 in McKinney, Texas where he had resided for the last five years to be near his daughter and family. He was born in Devine, September 25, 1921 to  Rufus Elmer Lindsey and Dovie Cude.

He had lived a long and active life and died at the age of 98 after a short illness.

Elmer grew up in Devine, Texas attending elementary school through high school, graduating from Bigfoot High School class of 1941. On July 11, 1942 he was sworn into the U. S. Army, after several months of training he was shipped to Oran (Algeria), North Africa. He was assigned to the 715th Engineer Company south of Oran. He served our country there and in Italy. He was honorably discharged at Fort Sam Houston in San Antonio, December 1945.

After returning from the war he married the love of his life, Helen Elizabeth Rosenauer, on March 13, 1946. They lived in or around the San Antonio, area for most of their married life. Elmer worked for the Missouri Pacific Railroad for 32 years. He enjoyed fishing, hunting, wood working and dominoes, rooted for the Rangers Baseball team, He  served as deacon of First Baptist Church Pearsall, for many years.  He actively served in the American Legion Organization for 65 years and the Frio County Masonic Lodge 399 A.F. and A.M. for over 50 years holding the position as Chaplain for this Organization for two years.

In lieu of flowers the family suggested donations to the church.

Arrangements are under direction of Hurley Funeral Home, Pearsall.