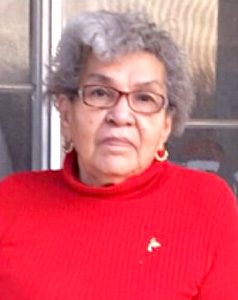 Melba R. Viesca, 87, of Pearsall, died on November 5, 2019 in San Antonio. She was born on July 5, 1932 in Pearsall to Pablo Rodriguez Sr. and Beatrice Hernandez Rodriguez.

She is preceded in death by her grandchildren, Ronaldo Ramirez Jr., Jimmy Rodriguez III and Melody Moreno; siblings, Genoveva Carrizales and Pablo Rodriguez.

Visitation was held on Friday, November 8, at Trevino Royal Oaks Funeral Chapels from 2 p.m. to 9 p.m. with a rosary recited at 7 p.m. Funeral mass was held on Saturday, November 9, at Immaculate Heart of Mary Catholic Church, 10 a.m. Interment followed at the Pearsall Catholic Cemetery East Side.