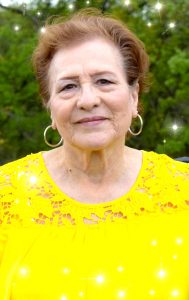 She is preceded in death by her parents and her brother Arturo Roman.

Delgado was rich in her faith, prayed the Rosary daily and enjoyed sewing, needlepoint and taking pictures.

Visitation was held on Monday, December 30 at Peters Funeral Home from 5 to 9 p.m. with a Rosary at 7 p.m. Funeral Services were held at the Sacred Heart Catholic Church on Tuesday, December 31 at 2 p.m.