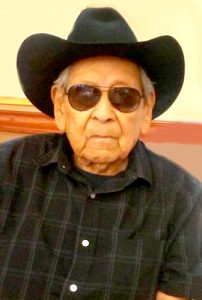 During his lifetime he worked in the Chicago-land area doing landscaping. In the 1980’s he settled in Cotulla with his family. Julio was his own boss, working as a jack-of-all-trades in the community. A story teller of his life and lover of music, he played his accordion and guitar till the end.

Memorial Services were held on Thursday, January 2 at Peters Funeral Home from 11 a.m. to 1 p.m. with a Prayer Service at 1 p.m.