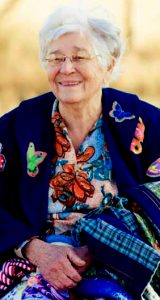 She is preceded in death by her parents, husband of 48 years, Fred Gordon Carnes, sisters Vergie Pearl and Myrtice Brewer and husband Douglas, and daughter-in-law Elizabeth Swayze Carnes.

Her father died suddenly when she was three months old. She grew up on a farm just outside Yoakum with her mom and step-dad. She married Fred in 1936 and moved to a ranch near Pearsall a few years later. Louis Mae was an avid quilter and seamstress and would play a competitive game of 42 whenever she got the chance. She was active in the Christian Church of Pearsall for many years as well as the United Methodist Church in more recent years and was a member of the Christian Women’s Club, Extension Homemakers club, Fun Friday, Mission Quilters and participated in other community events.

In her later years, she made quilts with her Mission Quilters for families she heard about that had lost their homes to a fire or storm and made dresses for orphans.

There was no visitation at the Hurley Funeral Home Chapel in Pearsall prior to service.