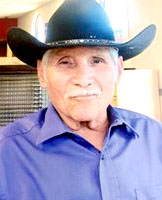 Timoteo Flores Medrano (El Cuate), 86 of Pearsall, died on January 6, 2020. He was born on August 22, 1933 in Pearsall to Martin Medrano and Felipa Flores Medrano.
He is preceded in death by his wife Francisca Saldana Medrano (Pancha), his parents and siblings Pablo Medrano, Cruz Torres, Martin Medrano, Anita Quilimaco, Christina Rodriguez, and Santos Elizondo.

Timoteo was laid to rest on January 11, at the Frio County Cemetery next to his parents and twin brother Martin.