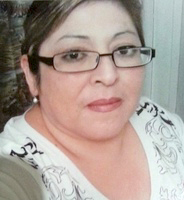 Cynthia Torres, 45 of Charlotte, originally of Pearsall, died on January 22, 2020 in San Antonio. She was born on August 30, 1974 in San Antonio to Javier Torres and Yolanda Castor Torres.

She is preceded in death by her parents. Torres is survived by her son Mark Leal and wife Angelia Delgado of Charlotte, siblings Noelda Torres and Javier Torres, grandchildren Amira Leal and Ameirre Delgado.

Visitation was held on Tuesday, January 28 at Trevino Royal Oaks Funeral Chapels in Pearsall from 2 to 9 p.m. with a rosary recited at 7 p.m. Funeral mass was held on Wednesday, January 29 at St. Joseph’s Catholic Church in Dilley at 10 a.m. Interment followed at the Dilley Cemetery

Arrangements were under the direction of Trevino Royal Oaks Funeral Chapels, Pearsall.