A high-speed chase through downtown Pearsall ended in a crash near the elementary school around noon on Monday, police say.

According to law enforcement agencies, a man later identified as 34-year-old Moises Espinoza crashed his sedan after he led officers on a chase for nearly 30 minutes.

Texas Highway Patrol troopers reported that they had attempted to effect a traffic stop on IH-35 near Lytle and that Espinoza drove away at high speed, initiating a pursuit that reached speeds of 120 miles per hour.

Espinoza drove into Pearsall shortly before noon on the business loop and sped through town, ignoring all traffic lights before crashing into a constable’s car. Investigating officers will determine whether Espinoza caused the collision in an attempt to block or hinder the constable from pursuing him.

After striking the constable’s car, Espinoza turned left onto Pecos Street then left onto Ash Street, where he reached estimated speeds of 70 miles per hour on his way north. He then drove onto Trinity Street before turning right onto Oak Street as far as the parking lot of the Walmart store. Police say Espinoza drove through the parking lot and into a westside residential area.

The chase came to an end when Espinoza smashed his car into a sedan belonging to Armando Romo, who had been in the neighborhood as part of his election campaign.

Investigating officers have indicated they believe Espinoza drove into Romo’s car because he had mis-identified the sedan as an undercover police car.

During the pursuit, Espinoza had also caused a collision with a Pearsall school district police patrol vehicle.

Espinoza was immediately handcuffed after his final crash and allegedly became combative with officers. Reports indicate the suspect broke the windshield of a Highway Patrol vehicle after he had been taken into custody.

A 37-year-old female who had been traveling with Espinoza was transported by ambulance to University Hospital in San Antonio.

Chief Salinas expressed concern over the decision to pursue the chase through downtown Pearsall and near the schools.

“Anytime we have an outside agency engaging in a pursuit, our first strategy is to close off all entrances of the city,” Salinas said. “If this fails, we will assist the agency as much as possible without our units putting the public and our citizens at risk. The decisions that the Pearsall police officers make are always based on whether the pursuit can be conducted safely. Every agency has its own policies to determine when to continue a pursuit.”

Espinoza was transported to the Frio County Jail and has been charged with state jail felony possession of methamphetamine; evading arrest with a motor vehicle; first-degree felony aggravated assault with a deadly weapon; Class A misdemeanor assault on a peace officer and criminal mischief.

City on brink of charter violation 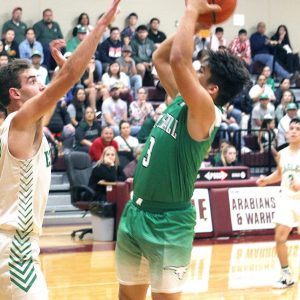