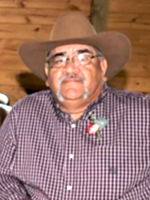 Antonio M. ‘Tony’ Garcia, 55 of Pearsall died on April 16, 2020. He was born on March 3, 1965 in Pearsall to Roman D. Garcia and Lucia Morales Garcia.
He is preceded in death by his brothers-in-law Jose Gonzalez and Heraclio Gonzales, sister-in-law Delgadina Villanueva, in laws Maximino and Maria Gonzalez.
Tony is survived by his wife Maria Dolores Garcia, children Mari Benavides (Roque), Mario Antonio Garcia (Elida), Laura Garcia-Dominguez (Jerry) and Jeremiah Anthony Garcia (Natally), father Roman Garcia, mother Lucia Morales Garcia, brothers and sisters Maria Magdalena Montemayor, Rebecca Collinsworth, Peter Garcia, Paul Garcia, Janie Garcia, Frank Garcia and Teresa Garcia. He is also survived by 16 grandchildren, two great grandchildren, three step great grandchildren, nieces and nephews.
Tony, as he was known, married his junior high sweetheart Dolores on April 19, 1980 in Melon on his family’s ranch. Together they raised four children and had numerous grandchildren. Tony worked as an over-the-road truck driver for 23 years. He was currently a gauger with Diamond Energy.
He was an active member of the Immaculate Heart of Mary Catholic Church where he was a member of the Crucillista’s. He was also the church’s auctioneer and bingo caller. He helped not only in the Pearsall’s bingo games, but the Devine and Lytle parishes as well. He was a Knight in the Knights of Columbus where he served as a Grand Knight for three years. ‘Coach Tony’ was a Little League coach for over 30 years.
Visitation was held on Monday, April 20 at Trevino Royal Oaks Funeral Chapels from 2 to 9 p.m. Rosary was streamed live on the Trevino Royal Oaks Funeral Chapel Facebook page at 7 p.m. at https://www.facebook.com/trevinoroyaloaks. Funeral mass was held on Tuesday, April 21 at the Immaculate Heart of Mary Catholic Church at 9 a.m. via live stream at https://www.facebook.com/Immaculate-Heart-of-Mary-Catholic-Church-1249452858429433.
Interment followed at the Pearsall Cemetery-East.