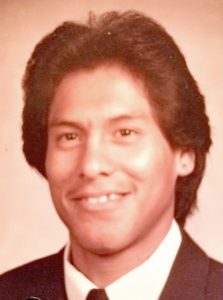 Juan Ignacio Navarro, 54, of Pearsall, died on April 25, 2020 at his home. He was born on August 27, 1965 in Pearsall to Luis Navaroo and Josefa Hernandez Navarro.
Navarro is preceded in death by his son Bobby Gonzales, parents and brother Abdon Navarro.
He is survived by his son Juan Navarro Jr. of Pearsall, siblings Jose Navarro of Pearsall, Maria N. Kimber (Irvin) of Michigan, Lupe Navarro (Janie) of Dilley, Tommy Navarro of Pearsall and Sandra Ventura (Ben) of Pearsall. He is also survived by numerous nieces and nephews.
Visitation was held on Wednesday, April 29 at Trevino Royal Oaks Funeral Chapels from 2 to 9 p.m. with a rosary recited at 7 p.m.
Arrangements were under the direction of Trevino Royal Oaks Funeral Chapels. An online guestbook is available at www.trevinoroyaloaks.com.30