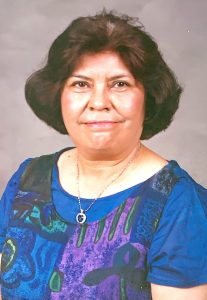 Juanita V. Corona, 72, formerly of Pearsall died on May 26, 2020. She was born on May 13, 1948 to Juan and Nicolasa Vinton.
She is preceded in death by her parents, husband Jose Corona Jr., siblings Alfredo Vinton, Rodolfo Vinton, Tomas Vinton, brother-in-law Guillermo Garcia and nephews Eddie Lee Vinton and Santiago Vinton.
Survivors include her nephew Jesse Vinton Jr. and niece Lucinda Nicole Vinton, siblings Estella Garcia, Gloria (Pete) Bueno, Charlie Vinton, Rene (Ysabel) Vinton, Linda (Bobby) Ramirez, Patricio Vinton and Jesse Vinton Sr., numerous nieces, nephews, friends, her two cats Nicole and Blacky and granddogs Hermes and Stella.
Juanita attended St. Phillip’s College in 1981 where she received an associate’s degree in nursing. She was often recognized for her kindness and selflessness, her family says and her natural gift was always serving people which was exemplified through mentoring and being preceptor to many nurses, sharing the wisdom and experience that she had gained over the years. She retired after 37 years to take care of her husband who had become very seriously ill.
Visitation will begin on Friday, June 5 at 5 p.m. with a rosary to begin at 6 p.m. at Mission Park Funeral Chapels South in San Antonio. Funeral mass will be celebrated on Saturday, June 6 at 10 a.m. at St. Lawrence Catholic Church. Services will conclude after mass.
In accordance with CDC safety precautions, mask wearing and social distancing protocols will be followed.
Funeral arrangements were under the direction of Mission Park Funeral Chapels South, San Antonio.