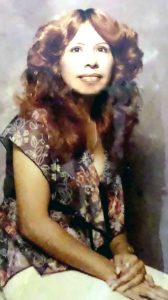 Modesta Hernandez died on May 26, 2020 at the age of 76. She was born on February 24, 1944 to Luciano and Josefa De Leon.
She is preceded in death by her parents and her brother Felipe De Leon.
Hernandez is survived by her children Bernice Ayala and Anthony Hernandez, grandchildren Angelica Ayala, Christopher Ayala, Anthony Hernandez Jr. and Aaron Damien Hernandez Martinez, significant other Lupe Torres, siblings Maria C. De La Rosa, Mase (Maria “Meche”) De Leon, Kayo (Yolanda) De Leon and Marcos (Delma) De Leon.
She is also survived by numerous nieces, nephews and other relatives.
Visitation was on Monday, June 1 at Peters Funeral Home from 4 to 9 p.m. with a Rosary at 7 p.m. Funeral Services were held at Peters Funeral Home on Tuesday, June 2 at 10 a.m. Interment followed at the Cotulla Southwest Cemetery.
Funeral arrangements were under the direction of Peters Funeral Home, Cotulla.