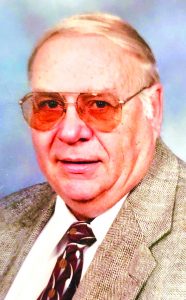 He was born on January 16, 1938, in Rome, New York. He served in the US Army from 1959 to 1965 and was stationed in southern Germany as a staff sergeant with the 2nd Battalion, 32nd Armor Regiment. He then pursued a career as a finance manager for Household Finance, serving in Kansas, Minnesota, Missouri, Oklahoma and Texas. He later worked as a realtor, as agent for the Xerox company, and for the US Census. He was a member of the American Legion and of the Veterans of Foreign Wars.

He is preceded in death by parents Casmere Hojnacki of New York and Gladys Hillman Hojnacki Lindfield of Houston, Texas; brothers-in-law Karl Kraus of Nuremberg, Germany, and Glenn Davis of Henderson, Texas; and grandson Timothy Robertson of Cotulla, Texas.

His hobbies and pastimes included hunting and fishing with his children and grandchildren, barbecuing, boating on lakes in Central Texas, coin and stamp collecting, and repairing his many cars and trucks.

A service will be held at Immanuel Prince of Peace Lutheran Church, Belton, Texas, at 11 a.m. Saturday, June 13.