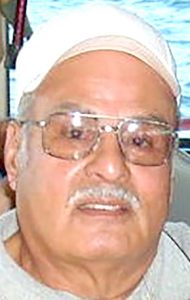 Eloy was preceded in death by his parents, sister Anita Fagan and brother George Cuellar.

Eloy grew up and attended school in both Derby and Pearsall. He married his wife Magdalena Guevara on October 22, 1955 in Big Spring and the two were married for 65 years. The couple lived in Texas, California, Washington, Oregon and finally settled in Hermiston, Oregon in 1977.

In 1978, Eloy acquired a sheep fertilizer and wood products delivery business he named “El Borrego”. He would deliver sheep fertilizer in his big truck, a ten-ton spreader, and deliveries were made to a majority of the fruit orchards in the Hood River and Dallas area and returning to Hermiston with a load of wood products for the auction yard, schools and personal gardens. He retired in 2018.

His hobbies included telling stories about his past to anyone who would listen, smoking fish and jerky for friends and family and spending time with his family.

A private family Mass was held at Our Lady of Angels Catholic Church. Burial was in the Hermiston Cemetery in Oregon.

Online condolences can be left at www.burnsmortuaryhermiston.com.

Funeral arrangements were under the direction of Burns Mortuary of Hermiston.