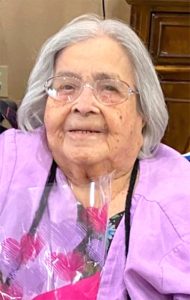 Funeral arrangements were under the direction of Peters Funeral Home, Cotulla,