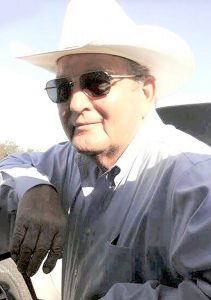 Donnie (Don) Ray Gray, 76, of Dilley, died surrounded by his family on November 27, 2020 at Methodist Hospital in San Antonio. He was born on June 29, 1944 at home on the family farm near Levelland, Texas.

He is preceded in death by his parents Lillian Pierson, Lester Gray, and son Jay Gray.

He moved to Dilley at the age of 15, making South Texas his forever home. There he met his high school sweetheart, Carolyn Alley who became his wife of 57 years and the mother of his two children, Donnice and Jay. He was a member of the First Baptist Church in Dilley and Cotulla Lodge #892, AF & AM.

Among Don’s favorite hobbies were being on a tractor farming peanuts and watermelons, flying an airplane or training his bird dogs. He enjoyed family time and traveling with his wife, snow skiing with his daughter, or quail hunting with his son, son-in-law and prized English Pointers, all named after Disney princesses. His fondest memories were those with his grandchildren, especially the summer months they spent with him in Dilley every year, appropriately referred to as Camp Meme Papa.

Don received a double transplant in 2004, receiving a kidney and liver from an anonymous family, allowing him to live for 16 more years. The family is asking people to consider becoming an organ donor to grant another family the same opportunity.