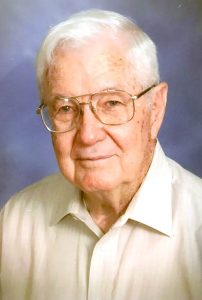 James ‘Jimmy’ Lawrence Casey, 90, of Cotulla died on on December 21, 2020. He was born in Three Rivers on November 14, 1930 to Ella Vae Murray and Floyd Casey during the Great Depression.

He lost his father at age three and he and his brother Joel were raised by their mother and her sister Lucille ‘Cele’ Murray.

Jimmy married Isla in 1951. He served in the Navy during the Korean War, and was stationed in Oakland, California, working on seaplanes. He was honorably discharged in 1954 and brought his wife and two infant daughters back to Texas.

He farmed cotton during the worst of the 50s era drought in Mitchell County. The family sold everything in 1957 to get out of debt, moved to Lubbock and he began training for a career in electronics. The Casey family moved to Corpus Christi after a couple of years, and in 1961 they had their fourth and last child and moved to Fort Stockton where Jim began working for the Federal Aviation Agency.

He became an ordained deacon at Northside Baptist Church there.

In 1964 Jimmy took a job at Salt Flat and moved his family to a place 90 miles east of El Paso. He brought the family to Cotulla in 1967 where they lived longer than in any other place. Four years prior to his retirement from the FAA at 55, Jim and Isla moved to Harlingen in the Valley before retiring and returning to Cotulla. In 2008, they moved to Taylor to live with their daughter Donna. Isla passed away in 2013.

James was active in the church in every community they lived, he was a Boy Scout leader and Little League coach. For 11 years, Jim and Isla volunteered for Texas Baptist Men Camp Builders, which meant they lived in a camper for eight months out of the year working on building projects at church camps around Texas.