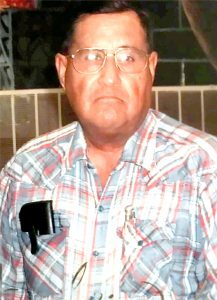 Antonio P. Morin, aka Tonio or Tony, died on January 4, 2021 at the age of 83. He was born in Cotulla to Emilio and Tomasa Perez Morin.

He is preceded in death by his parents, two younger brothers and sisters and his oldest sister Matilde Del Toro.

He was a rancher for Dr. C.P. Myers, where he worked alongside his uncle, Francisco (Frank) Jaimes, for many years, building corrals and learning the trade. He then started working at the Cotulla Stockyards and stayed there for 19 years.