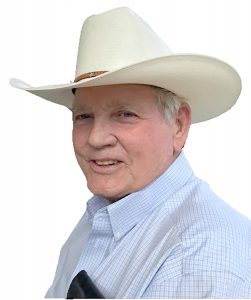 Charles “Freddy” Fred Hillje, died at the ranch December 29, 2020, due to complications associated with COVID-19. He was born on June 19, 1939 to Fred and Tillie Hillje at Buckholts in LaSalle County.

He is preceded in death by his parents and his brother Billie Ray.

He is survived by his wife of 57 years Peggy, daughter Laura Deiss (and husband Stephen), son Charles Hillje (and wife Penny), and daughter Roxie Avant (and husband Dale), and his grandchildren Thaddeus Deiss, Travis Deiss (and fiancée Raquel Salinas), Darby Hillje, Donie Hillje, Tilly Hillje, Abi Avant, and Tristen Avant. He is also survived by his sisters Margaret, Mary Jo, and Agnes, and his brother James, along with numerous nieces and nephews.

The family moved to the present day Hillje Ranch in 1942, where Freddy lived most of his life, ranching.

He retired from Southland Drilling in 1967, where he also developed a passion for flight and became a pilot so he could quickly return to his ranch when he had a chance. He was also a La Salle County Commissioner and operated a maintainer for Precinct 3. He was appointed to the Board of Directors of Valley Telephone Cooperative, serving as president and treasurer over the course of his 50-year tenure. He was also a hunting guide for many years.