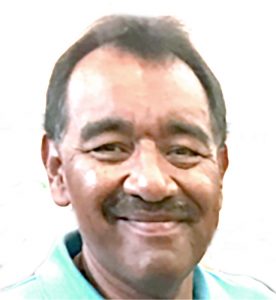 Jose Roland Segovia, 53 of Pearsall, died on February 3, 2021 in San Antonio. He was born on November 17, 1967 in Dilley to Margarito Flores and Eulalia Segovia.

He is preceded in death by his parents and sister Sylvia Flores.

Although born in Dilley, Roland made Pearsall his hometown at a very young age. While attending Pearsall High School, he met and later married his high school sweetheart Monica. Together they raised three children, Tiffany, Roland James and Araceley.

After graduation, Roland quickly took up a love for men’s softball and was a pitcher in the World Hispanic Tournament in Phoenix, Arizona, where he and his team, Eagle Auto Glass won the championship. Segovia was active in the Pearsall Little League and prior to having his own children, volunteered many years coaching and managing. Roland also held the position of Pearsall Little League President.

Segovia was also active in local politics. In 1999 he was elected and served three consecutive terms as Mayor for the City of Pearsall. He served as Mayor, Mayor pro-tem and as a council member. He led many projects for Pearsall, and was instrumental in helping bring a new McDonalds, the GEO facility and a new police department. He also organized annual toy drives, back-to-school supply drives and Christmas giveaways. Among his most recent projects was feeding the elderly during the current COVID-19 pandemic. Among his favorite projects was assisting in expanding the HEB store in Pearsall.