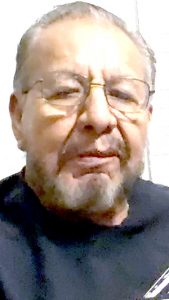 As a migrant worker with his parents he worked in the auto industry, a nursery, then the oil fields in California before he moved to Texas and started own trucking business. He worked many years for E.E. Hood, then Aaron Concrete until he retired. He moved to Pleasanton in 1992 to be close to his work. His hobbies included working on his yard, tending to his roses, and fixing things. He also enjoyed drawing, cooking, and watching old westerns.  A memorial mass was held on Monday, February 15.