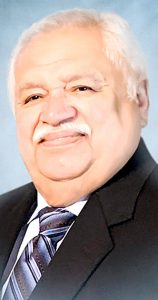 Raised in Pearsall, Dan is the oldest child and spent his early years working in the fields picking watermelon and working in a clothing store.

He met Ernestina during their teenage years and the couple were married in 1967. They had two children, Agnes and Brenda and moved to a Chicago suburb where Dan worked as a machinist. They later had two more children, Daniel and Cassandra.

Ernestina was baptized as one of Jehovah’s Witnesses in 1975 and Dan began attending the meetings at the Kingdom Hall. On September 10, 2016 Dan was baptized, dedicating his life to being a servant of Jehovah. He would go door-to-door sharing the message of Jehovah and enjoyed reading scriptures and talking about the Bible.

Known for his playful humor and smile, he enjoyed spending time with family and friends, especially his grandchildren. He liked cleaning and detailing cars.

Visitation was held on Thursday, April 1 from 3 to 7 p.m. A prayer service was held at 6 p.m. at Palmer Mortuary. Services concluded Thursday evening in the funeral home chapel.