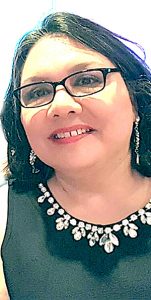 She was preceded in death by her father Jesus Castillo and her in-laws Alex and Mary Vidal.

Kathy graduated from South San West Campus High School in 1984 and worked for the San Antonio Express News for many years. She was later employed by the Texas Department of Human Services. It was there that she met her husband. The couple were married in 1996 and they moved to Eagle Pass where she worked for Eagle Pass ISD, before going back to work for the Texas Department of Human Services. She was later hired at the Maverick County Hospital District (MCHD) as a case worker, assisting applicants with finding financial assistance with medical services. She eventually was promoted to Coordinator of the Indigent Program until her retirement in 2017. On April 10, 2017 she was diagnosed with Lou Gehrig’s Disease (ALS) and fought the disease for four years.