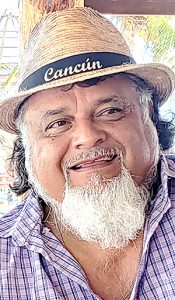 He is preceded in death by his parents, brothers Epifanio Naldomado and Jose Salinas.

Visitation was on Sunday April 18 from 3 to 5 p.m. in the chapel of Marrs-Jones-Newby Funeral Home followed by a Rosary at 5 p.m. Funeral services were held Monday April 19 at 10 a.m. from Ascension Catholic Church in Bastrop. Interment followed at Phelan Cemetery.