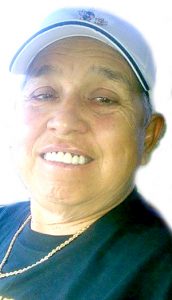 She is preceded in death by her parents and siblings Eleazar Trevino, Aurora Zamora, Alicia Navarro, Juanita Castaneda and Rudy J. Trevino.

Visitation was held on Friday, April 16 at Trevino Royal Oaks Funeral Chapels from 5 to 9 p.m. with a Eulogy to be read at 7 p.m. Graveside services were held on Saturday, April 17 at the Frio County Cemetery at 10 a.m.

Funeral arrangements were under the direction of Trevino Royal Oaks Funeral Chapels,.