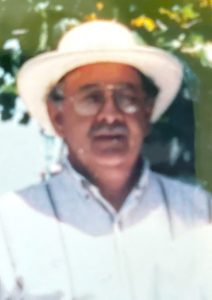 Vidal Garza Jr. 83, passed away peacefully in San Antonio on May 5, 2021. He is preceded in death by his parents Vidal Garza, Sr. and Dora Arredondo, his first wife Elida Guerrero Garza and three siblings, Elvia Mata, Gilberto Garza, and Oswaldo Garza. He is survived by his wife Sara Garza and five children, James Russell Garza (Patty Garza), Vianna Garza (Andrew Garza), Ronica Garza Alcala (Luis Alcala Jr.), Michelle Garza (Jessyca Steiert), and Brianna Garza Herrera (Javier Herrera), and stepson Christopher Schmerber, 11 grandchildren, five great-grandchildren, along with several nieces and nephews, three siblings Idalia Garza, Maria Elena (Nena) Ramirez and Hector Garza. Vidal was born in Carrizo Spring, Texas to Vidal Garza and Dora Arredondo. He served four years in the United States Navy after high school. He graduated from the University of Texas in Austin with a degree in Medicine of Pharmacology in 1972. He married Elida in 1960, an educator and counselor. Between 1961 and 1969 respectively, he welcomed his son and four beautiful daughters. They were the most important part of his life. Vidal was an avid camper and enjoyed the outdoors. His family frequented Garner State Park, several local rivers, and several National State Parks. He also enjoyed hunting and fishing and was a respected member of the community. Vidal moved to Eagle Pass in 1974 and worked for Rexall Drug company for 10 years. In 1982, he realized his entrepreneur dream of owning his own pharmacy store. Vidal and his family moved to Pearsall to open Pearsall Pharmacy. He moved to Uvalde in 2001 after closing the business. Later in life he settled in Quemado and continued working as a relief pharmacist in Maverick County and Val Verde
County. He will deeply be missed by family and friends. Visitation was held at Yeager-Barrera Mortuary in Eagle Pass on May 10, 2021 beginning at 10 a.m. to 2 p.m., services will conclude at the Funeral Home.