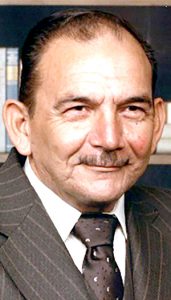 Oscar is survived by his sons Oscar III (Herlinda) and Larry (Estella) and daughters Anna Belinda (Frank) and Lisa Garza, 11 grandchildren and 18 great-grandchildren.

He grew up with his brother Oliverio Garza and sister Olga Garza, and with many relatives in Cotulla.

As a teen, he spent time with his father, learning how to run the family business from him and other family members. He learned contract negotiations, compensation, how to bid out jobs, manage employees and, most importantly, the importance of how to take care of all his employees and their families. His father recognized his business acumen and let him thrive in the business of providing field workers for farmers in the local community and at times out-of-state. He also developed a skill set on how to use the marketplace to make money during those difficult times. He would buy old vehicles, tractors, metal, copper, and anything else that he could turn around for a profit and also learned the value of real estate, purchased homes, land and flipped properties. During his years in Corpus Christi he worked with the Rainbo Baking Company until his retirement.

As he grew older, he worked with Paul Cotulla at the local grocery store alongside his brother Oliverio and other longtime friends. Mr. Cotulla supported his desire to start a business, acquire property and resell property. He would eventually own numerous residential homes which he rented and also flipped and made other numerous investments.

In Cotulla, he met Emma Segovia and they married and remained in Cotulla until moving to Corpus Christi and thereafter to San Antonio. Within a few years they started their family and had two sons and two daughters. As a family, Oscar and Emma would travel to visit relatives out of state and in Mexico.