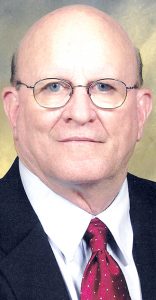 Doug lived in Carrizo Springs until the seventh grade and always considered it home. After two years of living in Albuquerque, his family relocated to San Antonio. While attending Jefferson High School, he met his future wife, Marilyn. They married October 13, 1962. Doug’s one ambition was to sell life insurance just as his father and uncles did. He first worked for Victory Life Insurance Co. and was hired in 1964 by Texas & Southern Farm Bureau Ins. Cos. During his 49-year career with the Farm Bureau, he served as Agency Manager for Atascosa, Victoria, Medina, Bandera, and Frio Counties. He retired after serving Medina County for 43 years. He earned innumerable awards and recognitions, along with many company trips to various locations around the world for him and Marilyn. There were also many company family trips where agents and their families formed friendships and memories with each other.

Among his hobbies, he enjoyed hunting mule deer on a lease south of Alpine and a round of golf. He also developed a fondness for fishing for big-mouth black bass. He also enjoyed saltwater fishing at South Padre Island.

A memorial service will be held August 21 at Hondo Funeral Home. Visitation will begin at 1 p.m. with a service at 2 p.m. Another time of visiting and fellowship will follow. Due to the rise of Covid-related infections, masks are strongly encouraged. Memorial donations may be made to the Yancey Baptist Church, P.O. Box 27, Yancey, Texas 78861, or a charity of your choice.