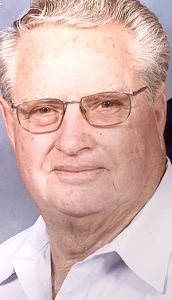 Kent McCary, 87, died on September 27, 20217. He was born on September 7, 1934 to Robert and Beulah McCary.
He was preceded in death by his wife of 66 years Beverly Ann McCary, sister Maydona Melton, and grandchildren Brandon Gallagher and Daniel Osburn.
Kent is survived by his children Reesa Lambert (Ray), Linda Manning (Robert), Dale McCary (JoAnn) and Rhonda McCary, 12 grandchildren, numerous great-grandchildren and great-great grandchildren, brothers-in-law Robert Curtis Kiefer Jr. (Judy), John David Kiefer and sister-in-law Vivian K. Sanders.
A graveside service was held Saturday, October 2 at 3 p.m. at the Dilley Cemetery in Dilley.
Anyone wishing to offer a word of condolences or share a memory with the family may do so by visiting www.hurleyfuneralhome.com.
Funeral rrangements were under the direction of Hurley Funeral Home, Pearsall.