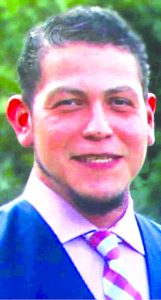 Teodoro ‘Ted’ Flores, 43, died on Monday, August 9, 2021 in Floresville after losing a two week battle to COVID-19. He was born on August 8, 1978 in Pearsall to Teodoro ‘Ted’ Jr. and Mara M. Flores, both of Pearsall.
He is preceded in death by his paternal grandparents Teodoro ‘Ted’ Flores Sr. and Carlota Flores and his maternal grandparents Feliciano and Consuelo Martinez.
Flores is survived by his parents, wife Stephanie Flores and his daughters Faye and Paige Flores of Floresville, siblings Monica (Robert) Villarreal of Pearsall, Raul Flores of San Antonio, Tanya (John) Waldrum of San Marcos, Barbara Ann Flores of New Braunfels and John Christopher (Carmen) Flores of Pearsall and numerous nieces and nephews.
Ted was born and raised in Pearsall and was a graduate of Pearsall High School. After graduation, he pursued a career in graphics designs and was a long-time employee of ACE Screen Graphics of San Antonio.
A memorial resurrection mass will be celebrated at the Immaculate Heart of Mary Catholic Church in Pearsall on Saturday, October 9 at 10 a.m. followed by a funeral reception at the IHMCC Parish Hall immediately after the mass. All are welcome and the family asks everyone to practice CDC and DSHS guidelines.