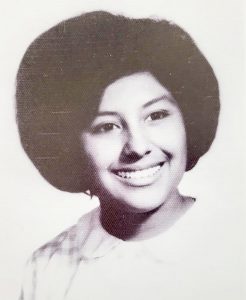 She is preceded in death by her parents, sister Alma Delia Herrera and her brother Jesus Garza.

Mrs. Adams lived in Encinal all her life except for a few months when she was in Memphis, Tennessee with her husband while he was in the United States Navy. She was the Principal’s Secretary at Encinal Elementary School for over 50 years.

Visitation was held at Peters Funeral Home in Cotulla on Thursday, October 14 from 4 to 9 p.m. with a Rosary at 7 p.m. Funeral services were held on Friday, October 15 at 11 a.m. at the Immaculate Heart of Mary Catholic Church in Encinal. Interment followed at the Encinal Cemetery. The family hosted a reception in her honor at the Encinal Community Center after the graveside service has concluded.