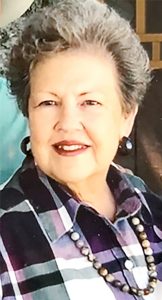 Visitation was on Friday, October 15 from 5-9 p.m. at Peters Funeral Home in Cotulla. Funeral services were held on Saturday, October 16 at 10 a.m. at First Baptist Church in Cotulla. A memorial service will be held for Nelta at Glidden Baptist Church in Glidden, Texas at a later date. Memorials may be given to His Love Christian Counseling in Lake Jackson, Texas or a charity of choice in Nelta K. Hill’s name.