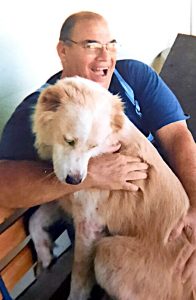 Richard Earl Brooks, 71, died Wednesday, October 6, 2021. He was born on May 25, 1950 and was adopted by Kenneth and Gerldine Brooks of Darst Creek, Texas when he was six years old and shortly before the birth of his brother, Kenny.

Richard had a love of animals and in high school he raised sheep each year for the annual stock show. He also kept dogs throughout his life.

Richard was a loyal Pearsall Mavericks supporter, making every game he could. He was a “coach’s assistant” in high school, an honor that he would recount in later years.

Richard attended Southwestern Assembly of God College (Waxahachie, Texas) after graduating from Pearsall High School. After Southwestern, he worked at a photo lab in San Antonio.

He missed Pearsall and his friends and Maverick games and returned home again, and was offered a job by Elbert Youngblood of Youngblood Honey, Inc. Richard lived on the Youngblood bee farm for several years, and helped with the beekeeping.

He remained a member of Pearsall Assembly of God Church throughout his life and provided support to youth ministries and regularly attended services.

In his later years, Richard lost the ability to keep house on his own and was provided with a caregiver, Rose De Leon, who became a lifelong friend. The two would talk and tease each other like siblings.

In his final years, Richard lived at the Pearsall Nursing & Rehabilitation Center.

Visitation was held from 9 to 10 a.m. and followed by a memorial service at 10 a.m. on Thursday, October 14 at Pearsall First Assembly of God Church.

A burial service was be held at 11 a.m. Friday, October 15 at Luling Cemetery in Luling.