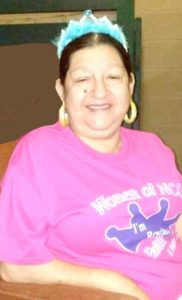 Anna Eloisa Gandara, 66 of Pearsall, died on October 18, 2021 at her home in Pearsall. She was born in Pearsall on June 1, 1955 to Manuel Chacon Jr. and Catarina Hernandez Chacon.

She is preceded in death by her parents and her siblings Willie Chacon and Albert Chacon.

Visitation was held Wednesday, October 20 at Trevino Royal Oaks Funeral Chapels from 3 to 9 p.m. with a Rosary recited at 7 p.m. Funeral mass was celebrated Thursday, October 21 at the Immaculate Heart of Mary Catholic Church at 10 a.m. Interment followed at the Frio County Cemetery.