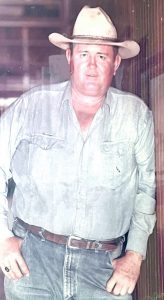 He is preceded in death by his parents, brother David, daughter Sammi, wife Myrta Ann Thompson and wife Nelta Jenkins-Benson.

Charlie, as he was known to many, attended Hunt Schools through the eighth grade and finished his schooling at Kerrville High School. Throughout his time in school, he worked at the local gas station in Hunt and later at TJ Moore Lumber and Furniture Store.

Upon graduation Charlie enlisted in the US Airforce in 1960 and served until 1966. He trained in San Antonio and was first stationed in Salina, Kansas. From Salina he transferred to Germany and then was stationed in Tripoli, Libya. At the completion of his military service, he was employed at Moonie Aircraft in Kerrville and later Swearing Aviation in San Antonio.

He married Myrta Ann Thompson on October 28, 1967 (divorced in 1987) and had two children, Sammi Kay in 1970 and Tom Alan in 1971. From 1967 when he married, he began working at Union Stockyards in San Antonio with his father-in-law and began a career in the cattle business. He later moved to Cotulla and operated the Cotulla Livestock Commission Company as well as assisting in managing ranching operations with the Thompson Family. He operated the auction in Cotulla and assisted in the Pearsall Livestock, The Shiner Ranch in Frio County, the Mendiola Ranch, Pescadita Ranch and Wallcot Ranch in Webb County, El Cid Ranch in Big Wells, Thompson Ranches in Zavala County and the Flat Lake Ranch in Hatch, New Mexico.

In 1992 he married Nelta Jenkins and returned to live in Cotulla.

He was an active member of the Young Farmers association, La Salle County Farm Bureau, La Salle Booster Club, Masonic Lodge 892 where he is a third degree Master Mason and a 32nd degree Scottish Rites Mason and the Shriners of San Antonio.