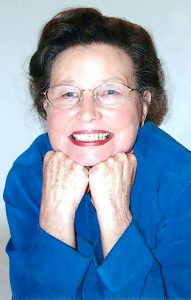 Vaudine Beal Dillard, 90, formerly of Dilley, died on November 23, 2021. She was born September 9, 1931, to Joseph Edward and Daisy McKay Beal in Goose Creek, just outside of Houston. She was the first born of identical twin girls. She had an identical twin sister, two brothers, and another sister. Her birthdate of September 9 was popular in the family, shared with her twin, her mother-in-law, her daughter, and her grandson-in-law.
She is preceded in death by her husband Billy Lanier Dillard of Dilley and her twin sister Maurine and husband Bobby Roberts of Pasadena, brothers Bob Beal of San Antonio and Doug Beal of Pflugerville.
Vaudine is survived by her daughter Lisa (Thom Hunter) of Norman, Oklahoma and son Ken (Mary Kay) Dillard of Cincinnati, Ohio. She is also survived by her youngest sister Dotty (Skipper) Koetter of Victoria, sisters-in-law June Beal of San Antonio and Veggie Beal of Pflugerville.
Vaudine is a wife of one, mother of two, grandmother of eight, and great-grandmother of fourteen and all of these live in Oklahoma, California, Ohio, and in Ramstein, Germany.
Vaudine graduated from Robert E Lee High School in Baytown where she and her two sisters each were part of the Brigadier Drum and Bugle Corp. She graduated Lee Junior College in Baytown and moved to Austin to attend the University of Texas (where her mother had attended). While in Austin she met Bill Dillard who would play the piano and sing Ain’t She Sweet when he saw her walking back (sometimes with another young man!) to Mrs. Lungren’s boarding house for UT students. The girls lived upstairs in her home and the boys out back in a garage apartment.
Vaudine and Bill were married August 31, 1952, in Baytown after she graduated from UT. They moved from Austin back to Dilley his hometown in 1953 after he had completed his service as a 1st Lieutenant in the United States Air Force. He was stationed in Japan their first December, so they celebrated Christmas in February when he returned.
When they returned to Dilley, Bill took over his dad’s Texaco wholesale business converting it to Phillips 66. Vaudine became and remained a fulltime wife, mother, and homemaker.
She became a faithful Baptist under Brother Lewis Stuckey at First Baptist in Dilley. Bill and Vaudine had two children, Lisa Anne in 1954 and Kenneth Lanier in 1956.
Vaudine would teach young teenage and grade school girls at First Baptist and later at the Belen Baptist Mission. She later became involved with the preschool and nursery classes of the church.
After Bill learned to fly, he wanted a co-pilot to make sure they kept the family safe. The couple enjoyed traveling together.
Vaudine and Bill moved to Oklahoma in 2007 due to the health needs of Bill. They moved to Norman, Oklahoma to be near Lisa and her husband Thom. Bill passed away in 2008.
Funeral services will be held for Vaudine on Friday, December 3 at the First Baptist Church in Dilley, at 11 a.m.
In lieu of flowers the family requests that donations be given to the children’s ministry at First Baptist Church in Dilley.
Funeral arrangements are under the direction of Peters Funeral Home, Cotulla.