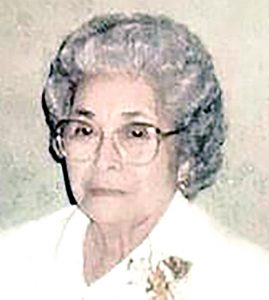 She is survived by her son Baldemar Moreno (Roseanna) of Fort Worth, daughters Yolanda M. Rodriguez of Grand Prairie and Juanita Lopez of Dilley, son-in-law Raul Ochoa Sr. of Dilley, sister Juanita De Leon of Dilley. She is also survived by 15 grandchildren and 27 great-grandchildren.

Visitation was held on December 5 at Trevino Funeral Chapel in Dilley from 5 to 9 p.m. with a Rosary recited at 7 p.m. Funeral mass was held on Monday, December 6 at St. Joseph’s Catholic Church at 10 a.m. Interment followed at the Dilley Cemetery.