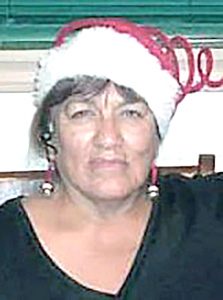 Samia “Pennie” Vanessa Ghazi (Valdez), 67, died on Wednesday, December 8, 2021, in San Antonio surrounded by her son and family. Nicknamed Pennie by her family, she was born on December 22, 1953 in Pearsall to Florencio Valdez Sr. and Josefa Martinez Valdez.

The youngest of nine, she was an accomplished tennis player at Pearsall High School, earning doubles state champion her junior year and was a singles state finalist her senior year. She attended Shriner University on a tennis scholarship and later transferred to The University of Texas at Austin. Pennie spent 22 years as a professional administrative assistant in the technology industry in Austin.

After her mother died, she began her second career following the footsteps of her father and brothers as a truck driver in various industries for 17 years. She spent the last four years supporting homeland security as a Resident Supervisor at Core Civic.

Pennie enjoyed her four dogs, Champ, Piper, Dodger and Tyson and was an active member of Immaculate Heart of Mary Catholic Church.

Funeral arrangement were under the direction of Hurley Funeral Home, Pearsall.