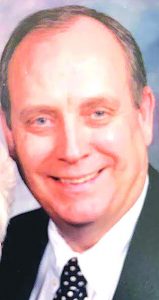 Wayne Evans Cook died peacefully on Saturday, January 22, at the age of 82. He was born in Pearsall on December 16, 1939, to George and Loreen Keck Cook of Cotulla.

In his retirement he enjoyed traveling, reading, listening to music and attending Milwaukee Symphony Orchestra concerts.

He is survived by his wife of 56 years, Marlene; daughters Julie Cook-Runnoe and husband John, Sheri Bohlman and husband Tim, and Leslie Krueger and husband Brian; grandchildren Alyssa, Matthew, Logan, Collin, Riley and Oliver; and by a niece, nephews, cousins, a brother-in-law, sisters-in-law and other relatives and friends.

He was preceded in death by his brother, Richard Keck Cook.

According to his wishes, there will be no funeral service. A celebration of his life for family members will be held at a later date.

Memorials may be given to the Milwaukee Symphony Orchestra.