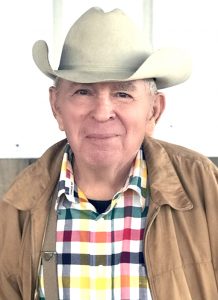 Fred Oscar Lancaster Jr., 84, died on March 27, 2022, after dealing with Parkinson’s and MRSA sepsis for several years. He was born in Pearsall on January 13, 1938 to Fred O. Lancaster Sr. and Helon Roberts Lancaster.

He is preceded in death by his mother and father, brother and sister-in-law James Benton and Marjorie Lancaster, sister and brother-in-law Marion and Bud Ray, and niece Denise Ray.

Fred grew up in Pearsall raising chickens, milking cows and selling the cream for spending money and played football for the Mavericks.

He spent 40 years away from Pearsall while at college, the US Army, employment with DuPont in La Porte, Texas, Montague, Michigan and Beaumont, from which he retired at 55 in 1991. Fred returned to Frio County, running Los Cuados Ranch with his brother-in-law Bud Ray until his death, spending two years in assisted living.

He enjoyed woodworking, leather tooling, stained glass, 42 dominoes, hunting, ranching and farming, barbecuing and baking, reading, and watching almost all sports. He even built his camp house and his log cabin home. Fred wanted to be a minister until he became angry with God after his mother died a painful death from cancer. He subsequently traveled a faith journey, including a Walk to Emmaus.

Funeral arrangements will be announced at a later date.