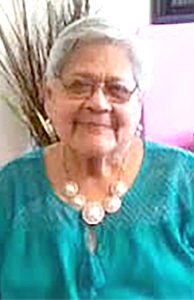 She is preceded in death by her parents, husband Victor “Vico” Quezada, and her brother Gilberto Valdez.

Visitation was held on Monday, May 30 at Peters Funeral Home from 5 to 9 p.m. Funeral services were held on Tuesday, May 31 at 10 a.m. at the Sacred Heart Catholic Church. Interment followed at the Cristo Rey Cemetery.