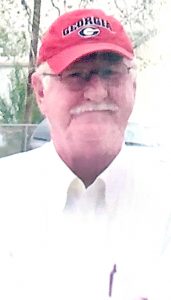 Homer began a love of music in his early teens when his grandmother Eliza Ferguson gave him his uncle Homer’s fiddle. He was self-taught on both the fiddle and guitar and enjoyed playing his favorite western pieces including “The Strawberry Roan and “Big Red”.

In the early 1970’s, he moved to San Antonio to become head of the new Earth and Sciences Department at the University Texas at San Antonio. Homer changed professions and received an Associates Degree in Criminal Justice. He took a position with the Lewiston Police Department and later worked for the state highway patrol and Orofino Police Department.

In 1959, he married Shelia Cone and they had two children, John Scott and Jennifer Lynne. In 1976,

Homer was later married to Carolyn Hawley and had two children, Eliza Jeanne and Will Morgan.

Homer married Gloria McDougall in 2015. He spent his final years with a heart condition.

Funeral services will be on Monday, June 27 at the Hurley Funeral Home in Pearsall at 10 a.m.