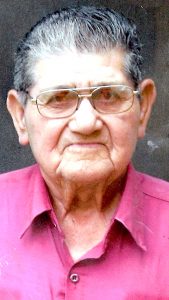 Visitation was held on Wednesday, June 15 from 5 to 9 p.m. at Hurley Funeral Home in Pearsall. A Rosary was recited at 7 p.m. Funeral mass will be elebrated on Thursday, June 16 at 10 a.m. at the Immaculate Heart of Mary Catholic Church in Pearsall. Interment will follow at the Frio County Cemetery.

Personal acknowledgments can be made at www.hurleyfuneralhome.com.