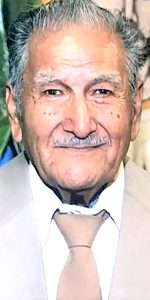 Pastor Jacobo L. Medrano died on July 19, 2022 in Pearsall surrounded by his family.

He is preceded in death by his son Jacob Medrano Jr. and daughter Leticia Medrano.

Visitation was heldon Monday, July 25 from 5 to 9 p.m. with a Prayer service to be recited at 7 p.m. at the Hurley Funeral Home Chapel in Pearsall. Funeral service was on Tuesday, July 26 at 10 a.m. at Templo El Buen Pastor in Pearsall. Interment followed in the Pearsall Cemetery.

Anyone wishing to share a memory or offer a word of condolences can do so by visiting www.hurleyfuneralhome.com.