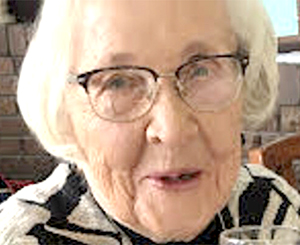 She was born to John and Ida Schorp, a Texas pioneer family in Rio Medina, Texas on December 18, 1921.

She is preceded in death by her parents, husband AE Buddy White, brothers Weldon and Harding Schorp, sister-in-law La Verah Schorp, in-laws Elda and Lee White, sons-in-law Pat Curoe and Dick Hughes, and many other relatives and friends.

In 1843, Neva’s Schorp ancestors came from the Alsace Region of France and settled the Castro Colony (now Castroville). In 1889, the family acquired the ranch in Pearsall, still operated by her family today. Before Neva started elementary school the family moved to Pearsall.

Neva’s childhood memories included time with extended family, lifelong friends, dancing, violin lessons and small-town Texas adventure. Ranch experiences became part of the family lore. She often spoke of The Great Depression and the lasting impact it had on family and friends, both in Pearsall and the nation.

With World War II looming, Neva interrupted her education at Texas State College for Women (now TWU) to marry her high school sweetheart, A.E. “Buddy” White, during their spring break in 1942. Buddy was graduating from Texas A&M that May, knowing that his graduation and commissioning with the Army Air Corps would lead to serving in World War II. Before Buddy left for North Africa and then Italy, Neva became pregnant with the couple’s first child. Neva Gene (‘Nege”) was born while Buddy was in Italy. Father and daughter did not meet until Nege was 36 months old.

Returning from the war, Buddy left the military and was employed by the Texas A&M Agricultural Extension Service, until he was recalled by the Air Force for the Korea conflict. During their time between wars, Nancy Jo was born in Pearsall. Two years later, John was born in Kenedy.

After being recalled into the military, Neva and Buddy decided to make the Air Force their future career. Assignments followed to Lackland Air Force Base, Parks AFB, California, Goose Bay AFB, Labrador, Offutt AFB, Nebraska, Maxwell AFB, Alabama, Torrejon AFB, Spain, and back to Offutt AFB, Nebraska before Buddy’s retirement as a Colonel.

In 1968, they returned home to a house they built in Pearsall, on the family block, joining her parents and two brothers and their families. Neva and Buddy were married for 51 years, celebrating their 50th wedding anniversary the year before Buddy’s death in 1993.

In lieu of flowers, it is requested that donations be sent to a charity of choice.

Following a private burial, a memorial service will be held at noon on August 13 at Saint Louis Catholic Church, in Castroville. A reception will follow the service.