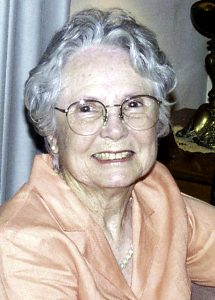 Madeline Josephine Brown, 94, of Cotulla, died on August 5. She was born on June 21, 1928, in Buckholt, Texas to Herbert H. Fiedler Sr. and Josephine Guidi Fiedler.

The seventh of nine children, Madeline graduated from Cotulla High School in 1946 and attended Incarnate Word College before the polio epidemic and a failed crop cut short her college aspirations. She married Charles Vernon Brown Jr. in 1947 and they moved to the Brown Ranch in 1948, where Vernon was already in partnership with his father.

In 1961, Vernon and Madeline started a dairy in addition to ranching to help support their family, which now included seven children. Along with caring for her children and Vernon, Madeline helped with any ranch and dairy duties. She was especially content when these duties included horseback riding.

Madeline and Vernon were proud that their children all graduated with a degree from Texas A&M University.

Madeline began painting after her children were grown. Most of her work included wildlife and scenery of the South Texas brush country.

Madeline was a long time member of Sacred Heart Catholic Church in Cotulla, and was part of the choir for many years. She was active in the St. Anne’s Society, the Cotulla Garden Club, and the LaSalle County Fair Association. She especially enjoyed the annual LaSalle County Wild Hog Cookoff.