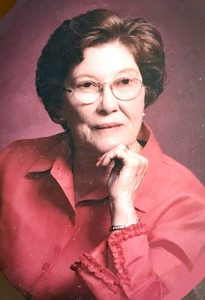 She is preceded in death by her parents, husband of 33 years, Richard, and her brother Charlie Edwards.

Edweina was raised in Pearsall, the oldest of five children, and graduated high school in 1948. She attended Texas A&I in Kingsville and received her Bachelor of Science degree and her teacher’s certification in 1951. Her first teaching job was in Premont, Texas.

She met her husband Richard on a visit to see her two aunts, who owned a cafe in Holland, Texas. Richard was stationed at Fort Hood Army Base in nearby Killeen. The couple were married on July 14, 1952 before Richard went overseas. Edweina continued to live and teach in Premont until Richard was discharged from the service in 1953 and they began their married life together in Richard’s hometown of Corpus Christi. In December 1953, they welcomed their oldest daughter, Sherry, and in 1960 their daughter, Tricia. Edweina continued to teach elementary school for the next 40 years. Her career began with her first teaching job at Crossley Elementary and ended at Weldon Gibson (formerly Ebony Acres) where she continued to substitute teach for several more years.

Edweina was a member of West Heights Baptist church for many years. She was very active in the church as the church secretary, taught Sunday school and vacation bible school.

Edweina enjoyed attending plays at the Harbor Playhouse, summer trips to Concan and the annual family reunion every fall. She was a member of the Red Hat Society and would play Bunco.

Funeral services will be held at Funeraria Del Angel Funeral Home, in Corpus Christi with visitation on September 9 from 5 to 7 p.m. and services at 10 a.m. on Saturday, September 10. Burial will follow at Robstown Cemetery in Robstown.

Memories or expressions of sympathy can be shared at www.CageMillsFuneralDirectors.com for the Mikeal family.