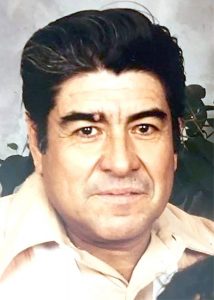 He is preceded in death by his parents and brothers Oscar and Pascual H. Carrillo.

He grew up in Dilley, the oldest of nine siblings and worked manual labor jobs like cherry picking in Michigan to help his family earn money. At one point, while participating in a high school club, he joined a pig contest to help his family’s earnings. While his mother set aside money for pig feed, Patricio cared, groomed and raised his pig so well, he won a blue ribbon for first place and got his pig auctioned for two hundred dollars, or about $3,000 by today’s standards.

In 1953, at the age of 19, Patricio joined the U.S. Army as a cannoneer to B Battery 287 Field Artillery Battalion, as well as a Supply Specialist. For three years he was stationed in Dachau, Germany on active duty. He was honorably discharged from the service in 1961.

After returning to the states, he went back to his hometown, only then finding out he needed to travel to San Antonio to stay with extended family. This is where he met Sara Reyes, who at the time, was a nanny for one of his aunts.

Sara and Patricio were married in February of 1958 and had their first daughter by the end of the year. Over the next 17 years, Patricio learned to become a tradesman from his father, and together, he and Sara had a total of ten children by 1975.

Patricio opened his own business, Tony Carrillo Painting in 1970. Sara and Patricio moved their family to Dallas for more opportunities and stayed with family for a year before settling in Farmers Branch, Texas.

When Patricio was in Germany, unbeknownst to him, he fathered a son. He and his family did not become aware of the news until the mid-1990s. Since he and his son’s reunion, the relationship between the Boxhammers and the Carrillos holds strong.

Once in Dallas, Patricio excelled as a tradesman painter and by 1975 he expanded his business to the Dallas-Fort Worth metroplex. He started and co-owned other painting construction businesses, as well as taught and supported numerous friends and family to live comfortably as a tradesman, as they migrated to Dallas.

Patricio eventually retired after being self-employed for 63 years.

Visitation was held on Wednesday, October 5 from 1 to 2 p.m., Vigil prayers by Father Franck of the Mary Immaculate Catholic Church in Farmers Branch were at 2 p.m. Services were held at the North Dallas Funeral Home in Dallas.

Interment followed on Thursday, October 6 at 10:30 a.m. at the DFW National Cemetery in Dallas.